A longer version of an article Jessica wrote for the 2018 Common Grace Advent Series (which could only fit 400 words), with all the amazing quotes from the School Strikers!

Watching the story of the School Strike 4 Climate Action and associated events recently has been a roller-coaster.

Excitement and pride to see young people stepping up this way, followed by disgust at government comments and criticism. Delight at all the media coverage and the excitement of friends and fellow activists, combined with anger at politicians refusing to meet with the students. Amusement over all the great signs and slogans the kids made, and admiration for the interviews they have given and their inspiring words, but also concern and desperation over where all this is leading.

The strike was born out of a letter by Milou and Harriet, year 8 students in Castlemaine, Victoria, who decided to temporarily sacrifice their education “in order to save our futures” and invited other concerned students to join them.

Harriet told the media, “When I think of all my blessings, it just makes me want to cry. This is because I am a lover of life. And the idea that my children and grandchildren may not get to experience the beautiful world that I live in, is one of the saddest things I can think of.”

Their words struck a chord. In every capital city, and almost 20 regional centres, an estimated 15,000 students left their classrooms to attend the 30 major strike events all over the country. The strike has made international news and students in Sweden, France, Norway and Finland have also held strikes in support of the Australian action.

Firstly, can I just say – these young people are amazing. Milou and Harriet, I take my hat off to you! And have you seen Greta Thunberg, who sparked the movement in Sweden, speaking to the COP24 meeting? She was incredible.

“We can no longer save the world by playing by the rules, because the rules have to be changed,” she declared.

“So we have not come here to beg the world leaders to care for our future. They have ignored us in the past and they will ignore us again.

“We have come here to let them know that change is coming whether they like it or not.”

Secondly, what are our politicians thinking? I don’t mean the lack of reaction or action in response to this stirring call – we are all used to that by now – I mean how dare they criticise these young people for being braver than they are?!

These apparently grown men felt threatened by children because the “rioting” schoolkids were told to give up ice-cream to address climate change, criticised for their spelling, and told that they will have a future in the dole queue.

“Mr Morrison says that he does not support our schools being turned into Parliaments. Well, maybe if the people in our Parliament listened to the science and took action like those of us in school, we wouldn’t have to resort to strike action like this.

“We’re sick and tired of politicians playing politics with our future. We’re striking to say enough is enough. People’s lives are on the line. It’s time to act before it’s too late.”

Clive Hamilton has commented that far from joining the dole queue, history shows that these student activists are likely to go on to be wonderful leaders. “There’s a reason they develop into leaders. It’s those young people who throw themselves into civic engagement who become the best citizens and most productive members of our society. They are the passionate ones willing to stand up. They are not content to ‘work, consume, die’ but commit themselves to making a better Australia,” he said.

Meanwhile, it has been wonderful to see the media coverage this innovative approach has garnered. Those of us who have been around for a while will remember how little coverage actions many previous climate actions and marches have received, while the School Strike has received coverage in most major media outlets, and is all over social media.

My friends and fellow activists are very excited, seeing this cut through in a way we haven’t seen in a long time.

Yet the government has continued to refuse to take action, or even to hear the children’s concerns.

Fourteen-year-old Tully Bowtell-Young travelled solo from Townsville for the chance to share her concerns with the Prime Minister – using her own pocket money to help cover costs.

“I think it’s worthwhile because nothing I have now is going to mean anything if I don’t have a future in this world,” she told AAP.

But the school students trying to meet with Prime Minister Scott Morrison were ejected from Parliament House.

The students did hit back though, with some incredible signs and messages. 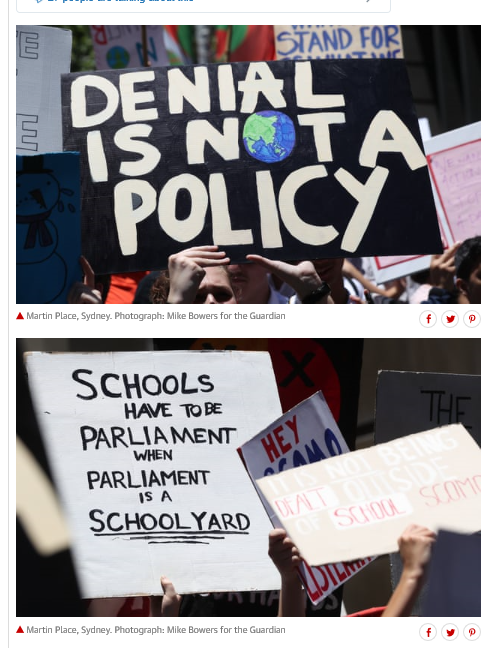 Ruby Walker, 17 years old, from Inverell, said: “I wake every morning in a state that is 100% drought declared. I have seen our government axe policies to protect my generation’s future. I have seen the failure to invest in solutions that would protect us and the failure to prevent and prepare for the climate crisis.

“Enough is enough. As young people, we didn’t create this problem, but we’re going to do everything we can to stop it. We are striking to push our politicians to treat climate change as the crisis it is and do everything in their power to keep fossil fuels in the ground.”

Most of all though, I’m still concerned (and yes, desperate) about the future and our lack of action on climate change. I’m desperate because the last report of the Intergovernmental Panel on Climate Change (IPCC) suggests we have less than 30 years to reach zero emissions globally in order to avoid the nightmarish climate scenarios that two degrees or more of warming will create. I’m desperate because a World Wildlife Fund report recently found that humanity has wiped out 60% of mammals, birds, fish and reptiles since 1970. I’m desperate because our planet and our lives are at stake!

I’m concerned that as great as our young people are, we don’t have time for them to grow up and take positions of power before we act. We needed action yesterday. And if we are going to halve our emissions in the next 12 years (as recommended by the IPCC), it’s going to be up to us “oldies” to achieve that. (Which is only fair – we have enjoyed the benefits of fossil fuels, now we need to clean up after ourselves.)

Through the School Strike 4 Climate Action, these young people have given us a taste of hope, of bravery, of inspiration – now it’s time for us, their older brothers and sisters, mums and dads, grandparents, great-grandparents, and all of their friends, to show our love for them by responding with support and real action. Because a lot still needs to change.

“But the climate crisis has already been solved. We already have all the facts and solutions.

“And why should I be studying for a future that soon may be no more, when no one is doing anything to save that future? And what is the point of learning facts when the most important facts clearly mean nothing to our society?”

Want to act? Call or meet with your MP and take a photo of your church standing in support of the strikers.